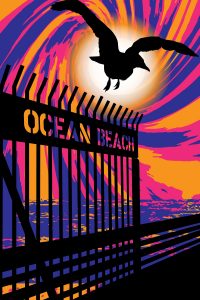 The winning design for the James Gang Printing’s recent Ocean Beach T-shirt design contest was created by Luke Brogoitti, with a stylish re-imagining of the beach community’s trademark seagull logo.

“I made this design for my love of Ocean Beach,” said Brogoitti. “To me, it’s the best town in the country.”

Brogoitti said his T-shirt design “was inspired by the countless beautiful sunsets I have seen since visiting/living in OB. Also, my favorite pictures are of the iconic gate to the pier. The seagull is very significant with our town as well, as you see it on almost everything to do with OB. I am extremely happy that my artwork will be a part of the greatest town in the greatest city.”

The OB-themed T-shirt design contest was sponsored by the James Gang Printing, which was originally founded in 1976 on Newport Avenue. The company was begun by the five James’ brothers – Ron, Rich, Greg, Mike and Pat – hence the “gang.”James Gang serves all of San Diego’s screen printing and paper printing needs. But its custom T-shirt designs have been greatly inspired by Ocean Beach’s unique retro style and local attractions such as the fishing pier and dog beach.

James Gang continues to be involved in community affairs participating in the weekly Farmers Market, the Ocean Beach Street Fair and Chili Cook-Off, and the Holiday Parade. James Gang earned the “Excellence in Customer Service” award by the San Diego Regional Chamber of Commerce in 2015.

Wanting to freshen the community’s iconic logo, James Gang put out a call to local artists to enter its T-shirt design contest that ended on Jan. 31. Five finalists were then selected and displayed on Facebook for the public to vote on their favorite OB-themed design.

Addressing the T-shirt logo contest, Alicia Shapiro, of Aliro Marketing, noted, “We were looking to generate spirit and unity in the community by holding this contest. We wanted something inspired by an artist who lives in the community. We wanted a fresh, new Ocean Beach design.” According to Shapiro, when Mike Hess Brewery, which has a tasting room in OB, heard of the design contest, they wanted to participate.

“We thought it would be great to have a ‘reveal’ party at Mike Hess, to let the public know who won out,” said Shapiro, who added that about 10 artists submitted designs for the contest, a field narrowed down to five for the public Facebook voting on the eventual contest winner. 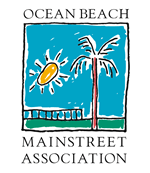